Direct DME Synthesis From Natural Gas: A prominent market for alternative fuels has emerged, providing an opportunity to establish a niche in a profitable industry. Dimethyl ether (DME) has been identified as an attractive fuel alternative and has seen an exponential increase in demand in the Asia Pacific. Dimethyl ether (DME) is a non-petroleum based transportation fuel, to act as a clean replacement for diesel fuel. Forecasts predict that the DME market will increase rapidly in the rest of the world.

In recent years the demand for DME has increased as it is considered a major substitute for propane in LPG used as fuel in the industry. DME production has great advantages as it is produced from Natural gas.

Natural gas is being produced more frequently from renewable energy projects and more-and-more explorational drilling is carried out within Southern Africa which means that a cheaper energy source (DME) can be produced due to cheaper and more readily available gas supply.

The problem is that DME synthesis is an expensive process especially when a clean fuel (high purity) is desired. The required DME purity to be classified as a clean fuel is 98.5% (Oberon Fuels, 2013).

The reactors are complex which makes it difficult to optimise the operating conditions. The separation of DME from the by-products are difficult and thus expensive.

The challenge is to design an efficient process which produces high purity DME at a low cost. This process will have a great economic prospective when produced at a low cost as there is a growing demand for alternative and “greener” fuels such as DME.

DME is produced from the dehydration of methanol. When using synthesis gas (syngas), which is a combination of hydrogen and carbon monoxide, as a feed, methanol needs to be produced first from the syngas and once methanol is formed, the dehydration reaction can take place. For direct synthesis, these reactions along with a water-gas shift occur in series within one reactor. Thus as the products of one reaction is formed, it’s then used as the reagent in the next reaction. The overall equation is used to determine the final amount of DME formed. However, each of the 3 series reactions has different conversions and thus leads to an exit gas with many different components to separate – thus lower DME selectivity (Azizi et al., 2014).

This is a 2-step process which involves the production of methanol from syngas in the first reactor, then a separator is needed to obtain pure methanol. This pure methanol is then dehydrated in a second reactor to form DME. This method is normally carried out at lower temperatures to prevent the formation of unwanted by-products like CO, ethylene, coke and H2 (Azizi et al., 2014). See the differences in Figure 1 below: 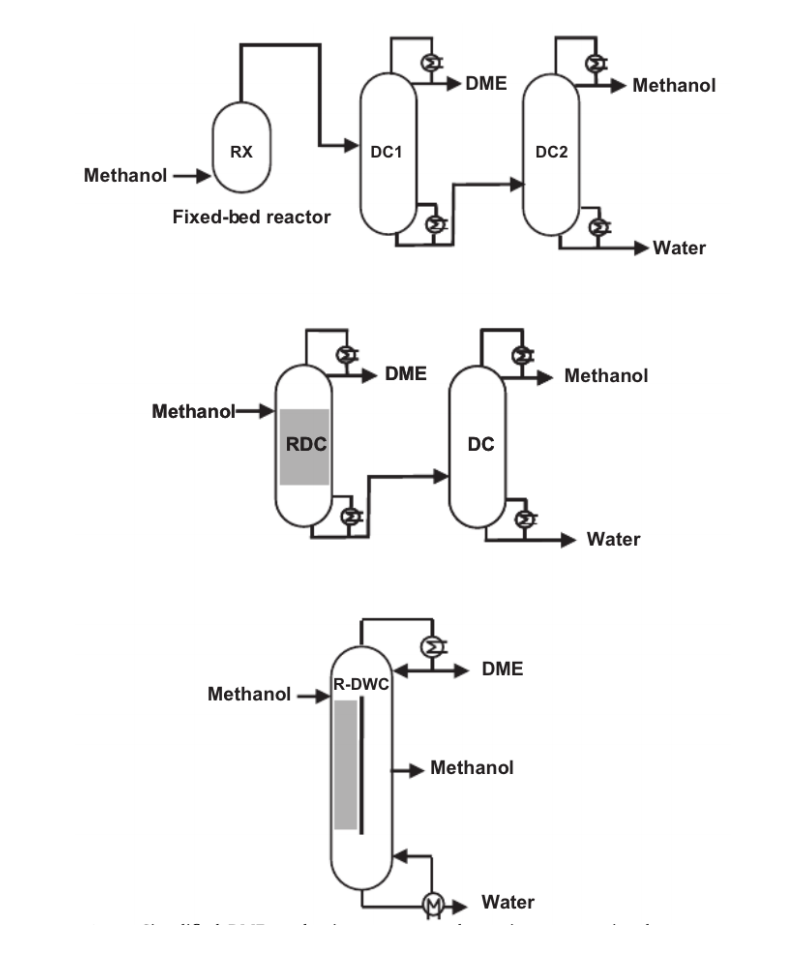 Reactive distillation (RD) is the process where the stages of a distillation column are infused with catalyst. This is particularly useful for reversible reactions, where products can be removed in order to shift the reaction equilibrium to product formation, and thus increasing reagent conversion. It is also useful for the elimination of equipment by combining the functionalities of a reactor and a separation unit into one unit. This has the potential to save on both capital costs and running costs. Taken a step further, reactive distillation can be used to react and separate 3 components by internally dividing the column into two sections. This has the potential to further reduce capital and running costs by eliminating the need for a second separation unit (Kiss & Suszwalaka, 2012).

Kiss & Suszwalaka investigated this concept for DME production by modelling the three processes shown in Figure 1. The designs were optimised to give a DME purity of 99.99% at a flow rate of 103.7 kmol/hr. The economic expenditures, energy requirements and CO2 emissions of the three processes were compared, and the results of their study are shown in Table 1.

From Table 1 the process using reactive distillation has the least economically viable, whereas the process using the reactive dividing wall column performed the best. In comparison to the conventional process, RDWC saves 23% in capital costs, 55% in running costs, 12% in energy requirements and is more environmentally friendly. Therefore, a process involving a reactive dividing wall column could potentially be the best argument for an indirect process.

The equilibrium conversion of syngas is one of the key deciding factors when choosing a reactor. Table 2 is a summary of the different advantages of each method compared with each other.

After all the above is considered, the direct synthesis method proves to be more attractive due to its simplicity, high conversion and less equipment. Direct synthesis wastes less natural gas than the indirect method and is further discussed below (Azizi et al, 2014).

3  How is DME Made – Direct Synthesis 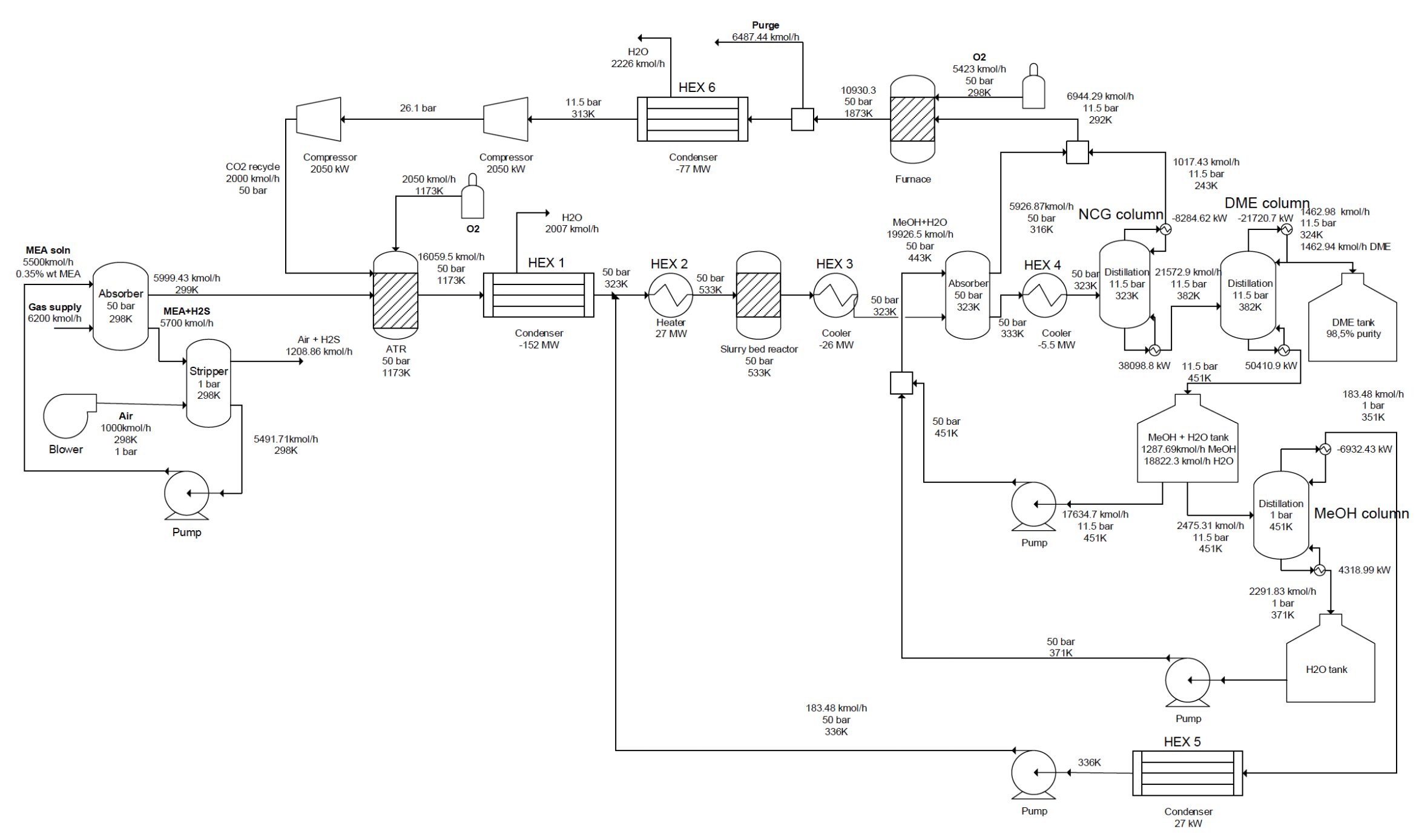 The DME is produced directly from carbon monoxide and hydrogen gas (syngas), which is generated from Natural gas reforming. Natural gas in South Africa is sourced primarily from Mozambique via the ROMPCO loop line. However, the Natural gas contains hydrogen sulphide (H2S), a corrosive compound, which is to be removed before the gas is processed.

The H2S is removed from the natural gas by the use of an absorption column. The desired separation of  +- 75% can be achieved when Monoethanolamine (MEA) is used as the liquid solvent in the absorption column. Water is the alternative solvent but very large flow rates are required to achieve the same separation as when MEA was used. Due to the large required MEA flow rate, the process would be most cost-effective when the MEA is recycled once the absorbed H2S has been removed.

From the absorber, sweetened natural gas flows to the Autothermal reformer (ATR). A CO2  ATR is used to ensure a H2/CO ratio of 1 in the ATR exiting stream, which is the optimal ratio for direct DME synthesis. In the ATR, the natural gas is mixed with oxygen and carbon dioxide. The catalyst used in the ATR is typically 10%Ni/2%MgO-γ-Al2O3. This catalyst ensures that little to no coking takes place in the ATR while a CH4 conversion of roughly 70% is achieved at 50 bar. Other H2/CO ratios can be used with other catalysts and different reaction processes. Excess unreacted gas from the process is burned in the burner section of the ATR to keep the conditions at 900C. CO, H2, CH4, CO2 and O2 are the main components in the exiting stream.

The synthesis of DME can be done with different methods, from different reagents and by using different catalysts (Azizi et al., 2014:151). Note that the direct synthesis of DME from natural gas is considered in this report. After reforming of natural gas to synthesis gas, the syngas is reacted in a DME reactor at high pressure (up to 70 bar) and temperature (between 250°C and 300 °C) (Azizi et al., 2014:165). Many different reactors are being used industrially for direct DME synthesis and include Fixed-bed reactors, Slurry phase reactors, Fluidised bed reactors, Membrane reactors and more specialized reactors.

The benefit of a slurry bed reactor (SBR) is that it allows for catalyst replacement during operation. The reactor is optimally operated at 50 bar and 260C . The reactor has up to 80% conversion of syngas and produces DME at a 90% selectivity to methanol at these conditions. The methanol is recycled into the reactor to achieve near-equilibrium conversions. The SBR is cooled by water tubes and produces steam which can be used to power reboilers or other heat exchangers and therefore increase the thermal efficiency of the plant.

DME produced in the slurry bed reactor needs to be purified: the reactor effluent contains significant amounts of methane, unreacted synthesis gas, carbon dioxide and methanol. The separation procedure is complicated by the presence of carbon dioxide and methanol, which when present together, significantly reduces the ease of separation of DME from the non-condensable gases.

The separation sequence starts with an absorption column, where 98% of the DME produced in the reactor is recovered. A large portion of the non-condensable gases is not absorbed and is sent to a furnace for energy recovery and purging. The recovered DME is passed through a cryogenic distillation column, where the remaining non-condensable gases are separated and sent to the furnace for energy recovery. The DME is still impure, with large amounts of water and methanol still present. This mixture is then passed through an ordinary distillation column, where 98.5% pure DME is recovered. Typically 95% of the DME produced in the reactor is recovered in this product stream (5% losses due to inefficient separation). Some of the remaining water and methanol mixture is sent to an additional distillation column, with the purpose of regenerating the absorption liquid and the recycle of methanol to the DME synthesis reactor. Some of the carbon dioxides generated from DME synthesis and from the combustion of the non-condensable gasses is recycled to the carbon dioxide reforming ATR. This recycles stream of carbon dioxide minimises emissions.

The non-condensable gasses that did not react in either the ATR or the slurry bed reactor, is burned in a furnace. The furnace operates at 1800C. It generates a significant amount of energy that is used in the rest of the plant. The rest is purged into the atmosphere.

Safety has always been a main concern and problem when dealing with chemical plants. The plant layout plays a critical role in the safety of the plant as ambulances and firefighters need to be able to reach all parts of the plant. The location of the plant and the environmental impact of the plant have to be researched. The design of the plant has to implement safe operations and preventing methods that meet the requirements of the different health, safety and environmental acts. Some environmental problems are CO2 and other greenhouse gas emissions and toxic chemical release into used process water.

The objective is to choose a suitable location for the plant to be erected, which will minimize the environmental effect on neighbouring settlements and surrounding nature. Safety considerations need to be incorporated into the plant layout and an environmental impact assessment (EIA) and HAZOP needs to be done.

The site must be selected while considering the availability of Natural gas or Syngas, practicalities associated with recruitment, job creation, market size, competition and surrounding settlements.  The EIA needs to include the risks, impact, emissions diagram and all the applicable acts.

The plant needs to be located close to a large body of water because it needs a lot of cooling water throughout the plant. Firewater will also be needed at high pressures throughout the plant. The Oxygen required for the ATR can be bought from Oxygen suppliers or an Air Separation Unit (ASU) could be installed.

The plant has to be divided into sections. There need to be large spaces between the sections to make sure that when a fire or explosion occurs, it wouldn’t affect the section next to it substantially. The large space also makes sure that there is space to move between sections when emergencies occur.

The 98.5% DME produced has a retail price that varies between 1 and 4 $ per kg depending on the purity and the location. The production of green fuels attracts large incentives from most governments around the world and makes for an attractive economic model. “The Dimethyl Ether (DME) Market was worth USD 4.92 billion in the year 2014 and is expected to reach approximately USD 11.72 billion by 2023 while registering itself at a compound annual growth rate (CAGR) of 10.12% during the forecast period” (Quoted from Globe Newswire News Room, 2017). Due to the fast-growing international market and, a great opportunity arises to locally produce and export DME in Africa.

More on Natural Gas from EPCM