Many industries deal with the processing of combustible and potentially explosive material that can trigger an explosion. The materials can be in gaseous, solid, liquid, and vapour forms. Petrochemical industries, coal mines, and chemical industries are seemed to have a higher risk of explosion since they handle these dangerous substances. Those combustible substances can form a potentially explosive atmosphere when mixed with oxygen. An electric spark that could usually be generated inside electrical devices or switches used in such an atmosphere has the potential to ignite it. The explosions can result in severe personal injury and property damage.

After World War II, the oil and gas industries expanded, resulting in a rise in wells and processing units worldwide. Following the developments, various instruments and electronic devices were developed to automate the oil and gas plant. However, hazardous environments in the oil & gas and coal industries are highly sensitive to electric sparks created by these devices. When utilizing electrical instruments, the risk of explosion or fire has been the limiting factor since energy levels were such that the energy limitation to the hazardous site was difficult to obtain. As a result, pneumatic instrumentation was utilized to regulate the hazardous sections of the process.

The development of semiconductor devices significantly decreased the energy level required to run instrumentation, making it feasible to establish the energy limitation protection approach known as intrinsic safety. Intrinsic safety systems and devices are extensively used in hazardous areas across many sectors. Avoiding fires and explosions is a great concern since no business or organization wants to be blamed for causing damages and injury.

2 What is intrinsic safety?

According to IEC apparatus standard IEC 60079-11, intrinsic safety is a type of protection that restricts electrical energy within the apparatus and interconnecting wiring exposed to potentially explosive atmospheres to a level below which cannot cause ignition by either sparking or heating effects. An intrinsic safety system restricts the amount of power available to electrical devices in hazardous locations to reduce the possibility of ignition.

The presence of potentially igniting substances in the air, such as fuel, gas, and oxygen, is always considered by an intrinsic system. The intrinsic system is designed such that the thermal or electrical energy of the instrumentation device or loop never exceeds a certain threshold, above it can result in ignition. In a nutshell, the intrinsic circuit is incapable of producing arcs, sparks, or thermal effects capable of igniting an explosion of a toxic combination, both during normal operation and under certain fault conditions.

Despite its complexity, an electric circuit deployed in a hazardous area is simplified down to essential components such as resistors, capacitors, and inductors to construct an inherently safe circuit. The circuit’s capacitor and inductor, which are capable of storing energy, must consider inherent safety. When the hazardous location’s switch is open, the capacitor collects energy, discharged when the switch shuts, resulting in an electrical spark. Similarly, the inductor stores energy released as an electrical arc when the switch is opened while the contact is closed. The energy output of the circuit must be less than the Minimum Ignition Energy (MIE) of the air/gas mixture in the hazardous location. The permissible values are then subjected to safety factors to ensure they are significantly lower than those required for ignition.

It is hard to specify the maximum permissible power for a field device in all circumstances. But in general, it is defined as voltage less than 29V and currently less than 300 mA. An intrinsic safety loop consists of field devices at the hazardous location, control equipment transfer power to the field device, and a safety barrier located at the safe area. The safety barrier, also known as intrinsically safe barriers, are protection circuits that keep excess energy from reaching the hazardous region.

The field devices in the hazardous system can be of two types: simple and complex devices.

Simple devices are apparatuses that cannot generate or store energy sufficient to ignite a dangerous mixture. These devices do not need to be approved for intrinsic safety, and they will not exceed the following electric ratings: 1.5 V, 0.1 A, or 25 mW.

Inductive components, relay coils, and solenoid valves can often function at energy levels much below the intrinsic safety limitations. Still, the energy released when the circuit is open can cause ignition. Similarly, a capacitive circuit can produce fire when the capacitor is discharged. Certain circuits must be used with this type of device to reduce the emitted energy to acceptable limits.

A resistor must be connected with capacitive components to decrease the discharged current to a safe level. On the other hand, inductive circuits can be protected by using a parallel circuit with a semiconductor diode to absorb any emitted energy.

Field devices at non-hazardous locations: Devices deployed in non-hazardous areas do not need to be controlled to intrinsic safety limitations. Still, they must restrict energy transfer to the hazardous areas to the required level. Devices that receive a signal from a field device in a hazardous area will not transmit back any power supply under normal conditions. Those instruments that transmit signals to field equipment will not allow the signal intensity to exceed a safe level.

The intrinsic safety barrier is a resistor-Zener diode circuit that restricts the current and voltage in faulty conditions to prevent high power from entering hazardous locations. During an event of a fault, the safety barrier will work to maintain the voltage to the field device below the ignition curve.

The connecting cable has properties that allow it to store energy. Hence, the length of the cables connecting the field device with devices at non-hazardous must limit to guarantee that the energy stored is not hazardous. Limiting the stored energy in connecting wires is impossible, but it is possible by reducing the capacitance and inductance of intrinsically safe apparatus.

Barriers that interface the field device and electrical devices installed at the non-hazardous location are of two types: Zener barriers or passive barriers and Galvanic or active barriers. 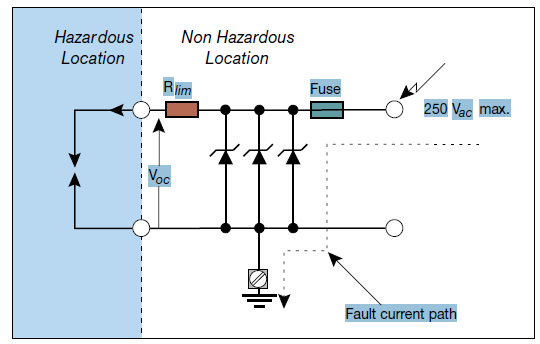 A Zener barrier will short the fault voltage more than 250 volts to the ground until the fuse blows. The Zener diode restricts the voltage to an intrinsically safe value. When the diode conducts, the fuse will burst. This breaks the circuit, preventing the diode from burning and enabling extra voltage to reach the dangerous region.

The Zener barrier can easily transform a standard circuit into intrinsically safe with lower component cost while ensuring reliable functioning. 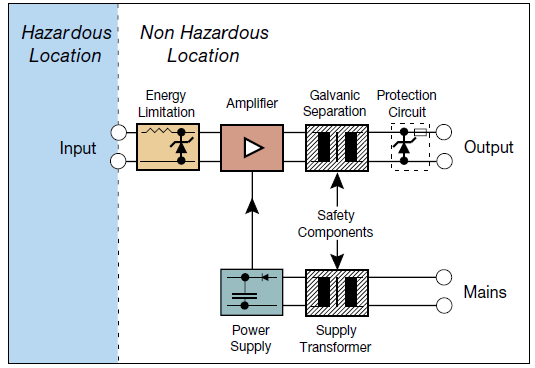 Galvanic barrier circuit protects power supply or signal conditioners that transmit or receive signals from potentially hazardous areas. The major distinction between the galvanic barrier and the Zener barrier is the components used to restrict the voltage. Galvanic isolation may result in the formation of a physical barrier between the input and output. By incorporating this separation between the two systems, all surge and grounding issues can be eliminated.

It is the most secure level of security and is reserved for highly hazardous zones. The possibility of two ‘faults’ and a factor of safety of 1.5 is considered in the safety assessment.

Level ‘Ib’ apparatus, which is adequately safe with one fault and a factor of safety of 1.5, is considered safe for use in less frequently hazardous areas (Zone 1).

The instrument and system’s safety must be tested and approved by an independent testing agency. Each country has its certification bodies.

An inspection will be performed following the system’s installation, followed by quarterly inspections for the duration of the equipment’s life. This is done to detect any damage, deterioration, or improper replacement of IS components.

Intrinsic safety provides an adequate degree of safety in all hazardous places. It is perhaps safer and less prone to accidental mistakes than other types of protection. Furthermore, its adaptability to available equipment and ability to do ‘live working’ makes it the obvious choice for instrumentation systems in hazardous locations.