Discussed in this report are the characteristics of and comparisons between Single Point Mooring (SPM) systems and Conventional Buoy Mooring (CBM) systems, also referred to as Multi-Buoy Moorings (MBM).  These systems are used for short term mooring applications associated with the offloading and loading of bulk liquid fuel tankers transporting refined and unrefined products.

Permanently moored vessels are excluded from the scope.

An SPM is a loading buoy anchored offshore that serves as a mooring point as well as an interconnection for tankers loading or offloading liquid products.

The tanker is moored at the bow by means of one or two hawsers to the buoy. The vessel always takes the most favourable position in relation to the combination of wind, current and wave and is free to align itself with the prevailing environmental forces at the time. As the vessel in its stationary state is always positioned head-on into the winds/currents direction, the total force is less than would be experienced by a vessel on a fixed mooring which is not always head-on into the prevailing conditions.

The vessel will approach the buoy with its bow into the dominant environment, thus maximising control while minimising the need for tug assistance.

A tug is required at all times during mooring and offloading to maintain the nominal amount of tension on the mooring hawsers to prevent collision of the tanker with the buoy and assist with the weathervaning of the vessel.

Refer to Figure 1 illustrating a vessel moored to an SPM system. 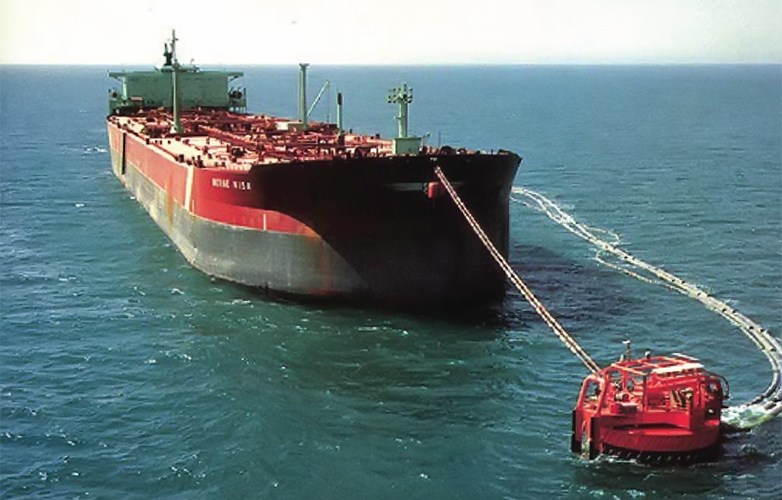 The buoy body is held in place by means of static legs attached to the seabed underneath the surface.  The body has a rotating part above water level connected to the offloading/loading tanker.  These two sections are linked by a roller bearing, referred to as the Main Bearing.  The moored tanker can freely weathervane around the buoy and find a stable position due to this arrangement.

The type of bearing used and the split between the rotating and geostatic parts determines the concept of the buoy.  SPM mooring concepts are distinguished in Table 1.

The size of the buoy is a function of the counter buoyancy needed to hold the anchor chains in position, and the chains are a function of the environmental conditions and the vessel size.  Figure 2 illustrates a Turntable type SPM system during installation.

Moorings fix the buoy to the seabed. The type of anchoring system is greatly dependent on local soil conditions and may consist of ships-, rig-, piles- or gravity anchors.

The SALM system is similar, except that the SALM is anchored by a single anchor leg. The primary benefit of a CALM Buoy over a SALM Buoy is ease of maintenance. The vast majority of Marine Terminals installed since the mid-1990s have been CALM Buoys. Figure 3 illustrates the CALM Buoy type concept.

Mooring components of a CALM system: 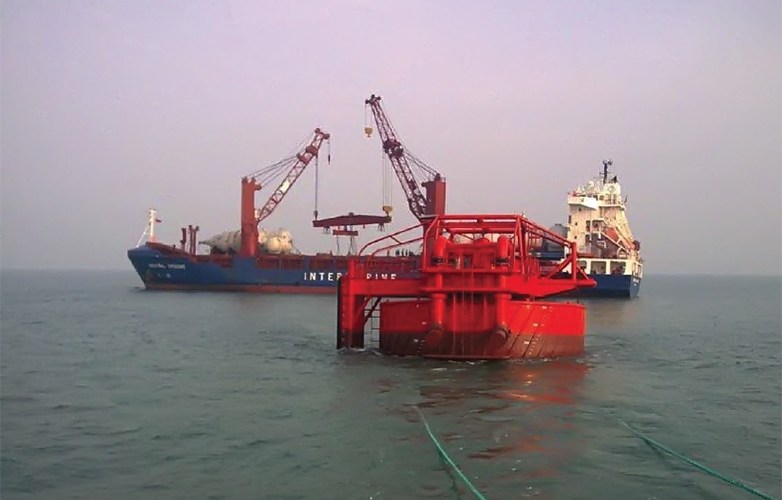 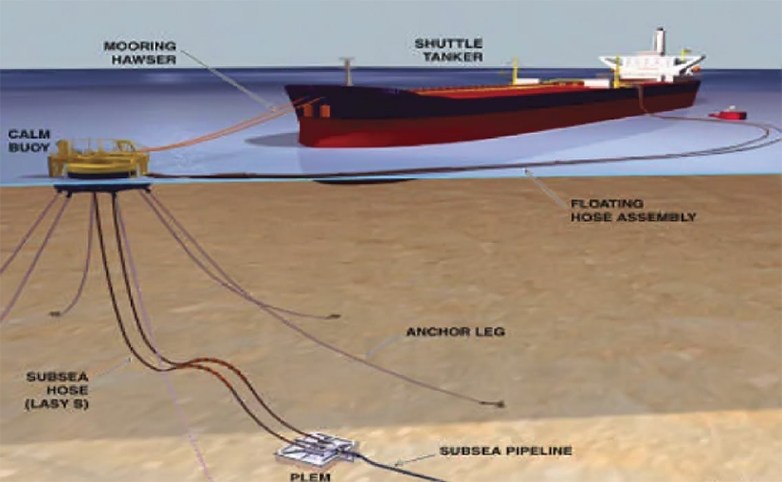 The heart of each SPM is the product transfer system. This system transfers products from the tanker to the PLEM located on the seabed.

Other possible components of SPMs are:

There are no vessel constraints for an SPM. The SPM CALM buoy configuration can accommodate the largest vessels, including VLCCs.

SPM CALM buoy systems are suited for locations up to approximately 100 m water depth.  This is preferential when deep waters are not available close to shore.
The minimum depth is a constraint for the design vessel Under Keel Clearance (UKC).

Conventional Buoy Mooring (CBM) or Multiple Buoy Mooring (MBM) is a mooring facility consisting of three to eight permanent mooring chains with anchors. It holds the vessel in a fixed position and does not allowe it to weathervane. A buoy is attached to the end of each chain to mark the position of the chain and allow pickup of the chain by the vessel to be moored.

The number of mooring chains is a function of the vessel size, metocean conditions and navigational constraints.

As soon as the tanker has maneuvered into position with the aid of tugs, a launch crew takes the tanker lines, one at a time, and tows them to the various mooring buoys.

When berthed, the tanker remains in a fixed posistion without tugs, and depending on the site specific conditions, sometimes without vessel anchors.

The ships’ mooring ropes are connected from either side of the vessel from the bow and the stern to quick release hooks on the conventional buoys.

After mooring the tanker to the buoys, pickup of the submerged hose strings and connecting the hoses to the midship manifold, the loading or offloading operation may start. The other end of the hose string is connected to the PLEM.

The tanker needs assistance in disconnecting from the mooring and navigating away from the CBM system.  Figure 4 is a representation of a general CBM system. 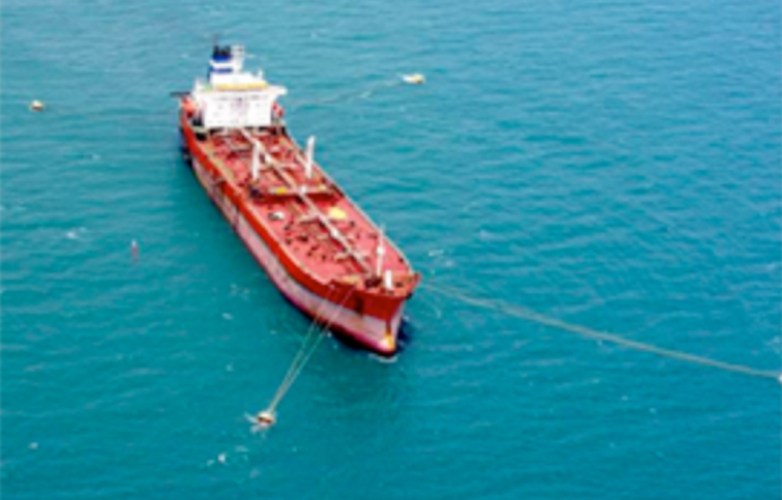 The buoys in a CBM system are conventional in that they act as mooring only structures.  They contain no product transfer paths.

The size of the buoys is a function of the counter buoyancy needed to hold the anchor chain for each buoy in position.

The buoys are manufactured either from steel or polymer materials.

The mooring system comprises of Mooring Buoys and Mooring Legs, where the buoys are generally moored to the seabed with chain legs and high capacity anchors, piles or clump weights depending on soil characteristics.

A typical CBM system’s buoys have mooring assemblies through the centre of the units, terminating in a mooring eye on the bottom and padeyes on top for the fitting of quick release hooks

The mooring legs for each buoy only consists of one anchor, unlike in the case of a CALM system where the buoy has between six and eight anchors. This is because the anchor chains of a CBM system only needs to work in one direction.

When the system is not in use, the hose string is laid down on the seabed away from the influence of the waves. The end of the hose is provided with a pick-up line and a marker buoy. The hose string is picked up by a small support vessel that also assists the tanker with mooring to the buoys. CBMs can be operated with up to four separate product lines

As no weathervaning is possible, it is often applied on projects where smaller tankers are employed, in areas where the environmental conditions are moderate or uni-directional and where the frequency of loading/offloading operations is limited.

The system can be designed to berth all sizes of tankers, with the largest CBM system in the world designed to accommodate vessels up to 225 000 dwt (Puma multi-directional loading facility, Angola, 2015).

CBM systems are ideally suited to shallow water applications up to approximately 30m water depth, in benign environmental conditions or conditions with a dominant directional character.

The minimum depth is a constraint of the design vessel UKC.

The offloading/loading operations can be undertaken via a number of hoses (one to four hoses) and can handle multiple products if required.

Want to write for EPCM?

Design of Large Scale Seawater Intake & Brine Outfall Systems
Scroll to top
We use cookies to ensure that we give you the best experience on our website. If you continue to use this site we will assume that you are happy with it.OK