Magnetic flux leakage (MFL) is a non-destructive testing (NDT) technique used to assess materials for corrosion, pitting, and deformations. MFL testing can be applied to pipelines, storage tanks, railways, cables, and other ferromagnetic materials. Inline Inspection (ILI) refers to the use of inspection devices commonly called intelligent pigs. When MFL techniques are applied to storage tank floors or other surfaces, floor scanners or other portable MFL technology can be employed to find defects.

ILI devices can be customized with several configurations for cleaning, inspecting, or other purposes. Intelligent, or smart pigs are outfitted with sensors and other tools to collect a wide variety of data. Configurations can include acoustic resonance technology, callipers/geometry sensors, electromagnetic acoustic transducers (ultrasonic), MFL sensor arrays, or a combination of these technologies.
Improvements in computing and data analytics continue to contribute to remarkable advances in detecting defects. Neural networks, machine learning, and developing technologies promise a future rich in advancements for MFL examinations.

Driven by product flow through a pipeline, pigs can come in a variety of materials, shapes, and sizes, each design best suited to a specific task or pipeline. Batching or separating differing products, cleaning, and inspecting are the most common uses for pigs. Before ILI begins, pipelines are often cleaned with such utility pigs.

The inline inspection devices known as smart pigs are ideally suited to performing examinations without halting the flow of product through a pipeline. Technologies used in intelligent pigs vary depending on the pipeline and pipeline product. For instance, the use of ultrasonic technology such as an electromagnetic acoustic transducer in a smart pig is best suited to a pipeline carrying a liquid product. MFL equipped intelligent pigs are best utilized in a gas pipeline, while geometry pigs are ideally suited to either pipeline product. 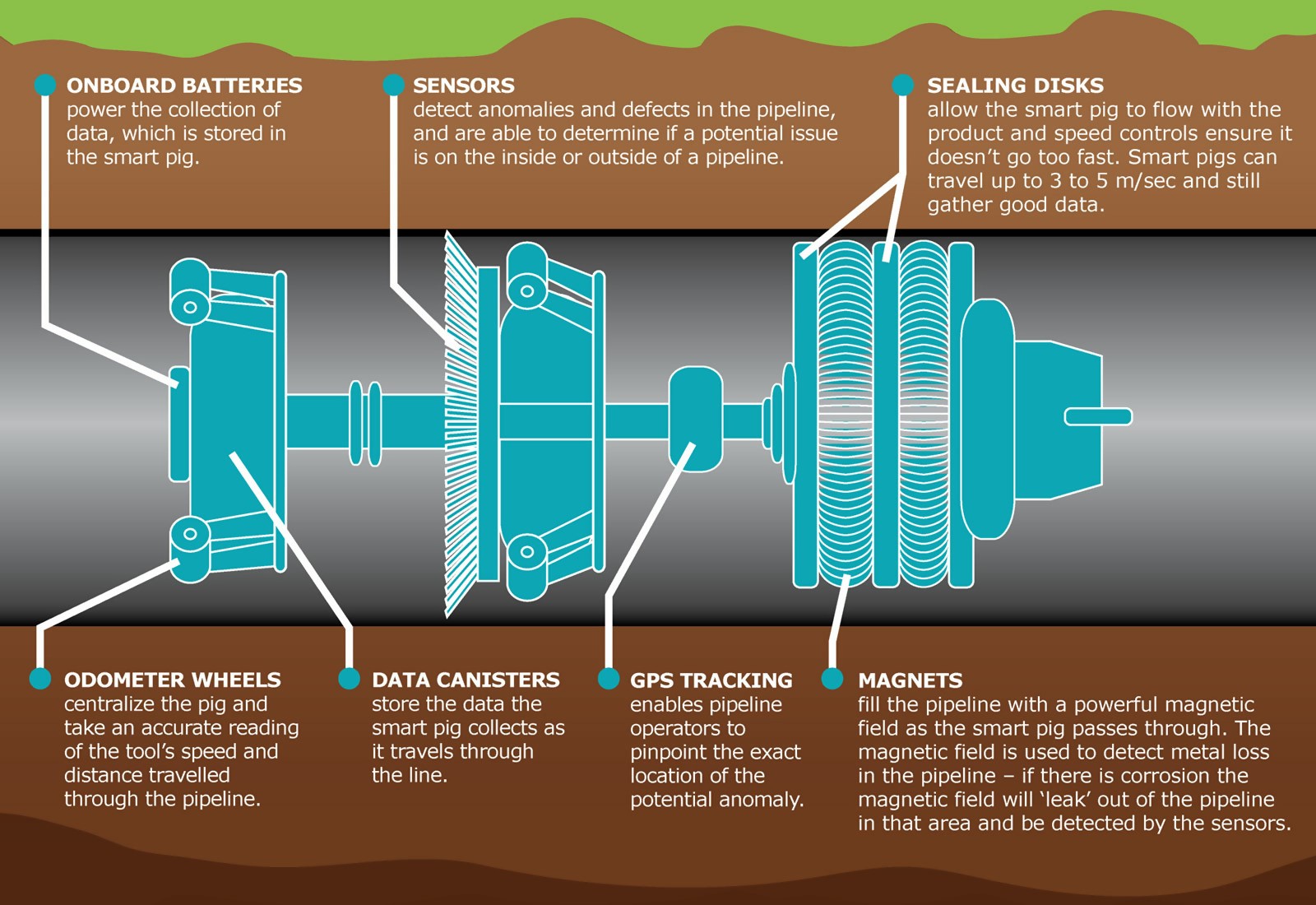 Today’s intelligent pigs are an efficient combination of technologies:

MFL testing relies on the uniform magnetization of a ferromagnetic material. Once magnetized near saturation, the magnetic field’s flux lines are observed. When a material is missing or damaged magnetic resistance increases at that site. The increased resistance causes a leak, distorting the magnetic flux lines generated by the MFL equipped ILI device.
Sensors aligned perpendicular or parallel to the defect and perpendicular to the measurement surface detect the size and shape of the anomaly. Electrical signals which correlate to these sites are recorded and analyzed to determine the precise location and properties of a defect. Assuming proper magnetization and sensors for the pipeline, the final factor is data analysis and interpretation.

Mathematically modelling the magnetic leakage in using MFL technique grants this type of nondestructive testing a significant appeal. Since the technologies involved in MFL were first developed, analytical models have been pioneered to allow visual representation, higher POD percentages, and further advancement of MFL techniques. Analytical and numerical models are used for these purposes. The specific methods, software, and analytical approaches are often the proprietary intellectual property of the company performing MFL testing.

The magnetic leakage field, anomaly shape correlating to magnetic field strength, and magnetic permeability of material was first related by the magnetic dipole model. This model could be used to simulate the effects holes, pits, and other defects in a two-dimensional model.
Relegated to detecting regular, simple defects despite the development of modern electromagnetic theory, analytical modelling is a helpful, convenient, and continually developing a method of interpreting MFL data. More commonly used is the method of numerical modelling.

Measuring a magnetic field accurately and precisely is significantly aided by advancements in computing, electronics, and the sensors used in generating these measurements. The primary methods of measurement include: 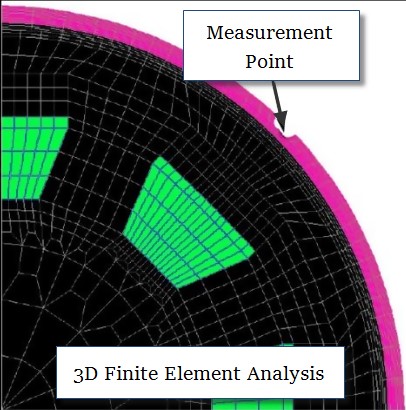 A wide variety of magnetic sensors with various measurement ranges, strengths, and weaknesses are available for use in MFL testing. Their basic function is to translate magnetic signals into electrical signals.

Additional non-magnetic sensors typically take the form of differential pressure sensors, hydraulic sensors, odometers, pneumatic sensors, and temperature sensors. The data from these sensors is compressed and stored while noise reduction techniques are applied to increase the accuracy of data analysis.

Selecting the right sensors for non-destructive MFL testing is critical to the success of the examination. One sensor is likely to be preferred in a given environment over another, for detection of buried defects or surface defects for example.

The signal pattern of MFL testing is dependent upon the sensor used; for example, when examining the change in a magnetic field or the magnetic field itself. Certain sensors are more durable while displaying less sensitivity, some have greater dynamic range than others. Sensors are always selected based on the expected circumstances, defects, and the magnetic leakage fields they create. Correctly using a combination of sensors may provide the best results.

Anisotropic magnetoresistance (AMR) sensors measure a phenomenon generated by applying an external magnetic field which rotates magnetization, changing resistance. This occurrence depends on the angle between the electric current and the direction of magnetization. Commercially available and less prone to noise when compared to giant magnetoresistance (GMR) sensors, AMR sensors can be integrated into an MFL configuration as needed.

Giant magnetoresistance sensors consist of alternating ferromagnetic and non-ferromagnetic thin-film multilayers and operates on the GMR effect. It detects large changes in electrical resistance to a magnetic field. This change is the result of spin-dependent scattering of electrons. Boasting high spatial resolution and sensitivity at low magnetic fields, they excel at the rapid scanning of surfaces when integrated into a sensor array.

Hall sensors are widely used in MFL technique, operating on the Hall Effect by measuring the normal component of the magnetic field. Inexpensive, relatively small and exhibiting high linearity, these sensors are a standby in ILI devices. 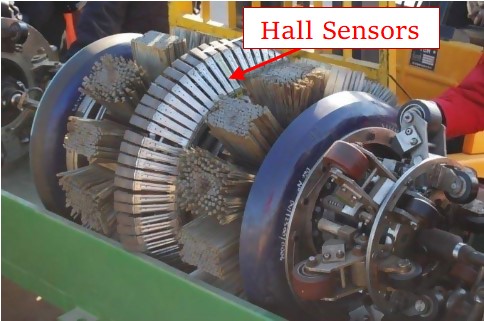 Pick-up coils are simple copper wire, wound around a core. They are capable of measuring the change in magnetic fields in the presence of anomalous defects. Inexpensive and highly adaptable for a variety of sensor configurations, these sensors are less sensitive than others.

MFL testing presents a few limitations due to its nature, including:

Machine learning or artificial intelligence (AI) relies on a core of information supplied by highly knowledgeable and experienced experts in a given field. This core of the information is called the expert system. The expert system is comprised of a comprehensive database, inference engine, a knowledge base, knowledge acquisition modules, and a human-computer interaction interface.

The comprehensive database stores a wide variety of information involved in the reasoning process of an AI system, including assumptions, intermediate results, objectives, and other functions.

Knowledge acquisition modules allow growth within the system and improve both accuracy and problem solving for the AI. These modules provide additional knowledge to the system, expanding and modifying the AI.

The human-computer interface allows users to interact with the AI system to adjust, adapt, specify, and otherwise submit requests to the system.

Advances in technology are at the core of non-destructive examination methods like MFL. The decades following its development have seen relentless innovation by practitioners, scholars, and engineers alike. Highly experienced engineers and technical personnel have contributed their accumulated knowledge to further development of sophisticated analytical methods. In addition to improvements in virtually every aspect of MFL testing, technologies that were theoretical a decade ago are presently in use, driving innovation faster than ever before.

The use of MFL technology for examination is critical for maintaining pipeline integrity and remains the most prevalent method for doing so. As a non-destructive examination method, utilizes inline inspection devices known as smart pigs to travel the length of pipelines, detecting defects with magnetic sensors. This technique can—with 80% or higher probability of detection—observe defects on the internal and external surfaces of a pipeline.
Hall sensors are favoured for measuring magnetic leakage fields and ground marking systems for accurately determining the location of defects. Once data is gathered, compressed, and stored, complex statistical identifications methods are employed to MFL signals to defect size and shape. Advances in software, computing, and artificial intelligence have paved the way for new advances to follow, as innovations continue to drive improvements in non-destructive testing methods.

Pipeline Buoyancy
Scroll to top
We use cookies to ensure that we give you the best experience on our website. If you continue to use this site we will assume that you are happy with it.OK