How safe is Industrial IoT for SCADA?

Extensive use of Information Technology (IT) by the industry in every aspect of businesses, including exploration, production, supply chain, transportation, logistics, etc., has allowed the industry to take on the competition and save on cost. The IT technology is getting upgraded at a swift pace and is bringing innovations in the industry by bringing automation and reducing human intervention.  The industry is moving towards a concept called Industry 4, which involves maximum automation in manufacturing using robotics and computer control. The use of intelligent and autonomous systems along with the Internet of Things (IoT) and cloud computing will make Industry 4.0 a reality.

SCADA systems have been used for many decades to monitor and control large distributed systems such as oil & gas pipelines, power lines, mining, etc. SCADA systems are being continuously upgraded to embrace newer technologies. Industrial IoT (IIoT) is one such technology that can take over SCADA function or work and an existing system to bring innovations to the system. The use of IIoT devices for SCADA can improve reliability, safety and bring energy efficiency. Using IoT with the large number of devices connected using an open network provides new attack surfaces to attackers and makes them vulnerable to cyber threats.

Due to their use in the critical system, any breach in the security of the SCADA system can be devastating and can lead to grave consequences. The exponential use of new technology in an industrial environment and its integration with the old system has increased efficiencies but raised concerns from a security point of view. This has led the National Security Agency (NSA) and the Cybersecurity and Infrastructure Security Agency (CISA) of the US Department of Homeland Security (DHS) to issue advisory to the American industry to reduce vulnerabilities in their system.

This article looks into the vulnerabilities in IIoT for SCADA systems for oil and gas facilities and ways to tackle the issues.

SCADA applications are limited to industrial units and are used mainly by Oil & Gas industry, power sector, railways, mining, and other utilities. Due to the stand-alone nature, with limited functionality and isolation from the corporate network, the security of the SCADA system was not a significant concern in the past. But after 1990, the attacks on SCADA and industrial control systems started, and the number increased slowly, raising concern in the industry and need arose for providing adequate security for such systems. A report by Trend Micro found 467 known vulnerabilities in the SCADA system in 2018 and 277 in 2019. Most of the attacks on SCADA systems have been using malware.

Some of the prominent attacks on the SCADA system include:

These incidents show that the impact of an attack on the Industrial system can be devastating, and the SCADA system’s security needs to be taken very seriously.

The IIoT constitutes a network of devices, sensors, and actuators with embedded electronics, software setup, and an integrated network interface. Industrial IoT uses smart/intelligent devices to collect information and smart actuator for controlling systems.  It allows the connected devices to be monitored and controlled remotely. This improves performance, accuracy, efficiency and reduces human intervention. These intelligent devices analyse data collected in real-time and collaborate with other connected devices to automate industrial and manufacturing processes. The IIoT combines data analytics with machine-to-machine communication to provide efficient solutions for the industry across varying network infrastructures by not only analysing the data collected but also generating business information and long-term data storage. The information collected is available anywhere via the cloud environment can be used for predictive maintenance and optimising business processes using innovative business models. However, the use of a wireless interface for communication simplified the implementation and increased security concerns. The wireless interface provides adversary new ways to exploit the network by eavesdropping and manipulating the system if proper security measures are implemented.

The security of IIoT devices is a critical concern in their adoption which cannot be ignored due to the advantage they provide. A report on the security of industrial control systems by Waterfall security solutions indicates that the top threat is from ICS insiders while the second-largest threat is from IT insiders. The threat from Common Ransomware, Targeted Ransomware, and Zero-Day Ransomware comes at 3rd, 4th, and 5th numbers. Other threats in order or priority include Ukrainian Attack, Market Manipulation, Cell-phone Wi-Fi, Hijacked Two-Factor, IIoT Pivot, Malicious Outsourcing, Compromised Vendor Website/ Remote site, Vendor Back Door, Stuxnet, Hardware Supply Chain, Nation-State Crypto Compromise, and Sophisticated Credentialed ICS Insider, etc. The report further says that in a typical setup it is challenging to defeat threats from ICS insider, Sophisticated Credentialed ICS Insider, Hardware Supply Chain, Cell-phone Wi-Fi, and Stuxnet as there involve stealing the credentials to launch the attack.

The Open Web Application Security Project (OWASP) for IoT security helps all the stakeholders in understanding security issues while using, building, or assessing IoT technology. OWASP has come out with the list top 10 vulnerabilities in IoT.

In addition to the above vulnerabilities, the IIoT system uses machine-to-machine (M2M) communications using new communication technologies such as Wi-Fi 6, 5G, and Time-Sensitive Networking (TSN), exposing the IIoT system threats faced by these technologies. The lack of security control and standardisation in IIoT devices leaves them vulnerable to threats and data security vulnerabilities.

SCADA networks are spread over extensive areas with thousands of data points, especially in oil and gas sectors and power distribution systems. The use of IIoT enabled devices and gateways for this distributed system will have many embedded devices with a long lifespan. These devices will collect live data and communicate using a machine-to-machine protocol and take necessary control at the edge level. At any point in such an overall system, the security breach can be used to penetrate the whole network. Maintaining the security of embedded devices is a big challenge as these cannot be updated like other software systems to mitigate evolving attacks. The oil and gas network system needs to be resilient to attacks, the effects of the attack are required to be minimised, and recovery from attacks should be quick with the restoration of security.

The security challenges for Industrial IoT for SCADA system other than in case of general IoT implementation include:

The attacks on the IIoT based SCADA system can be at many levels and are detailed below:

Other than above, the attacks on corporate networks and cloud networks are well known and will not be discussed here.

The biggest threat to IIoT based SCADA system is direct internet connectivity to the cloud of edge devices. However, in most modern oil and gas systems, a fibre optic cable is laid along with the pipeline for communication. Thus, for this type of network, the way forward is to use IIoT devices to collect data from the field and pass it on to an edge device that uses this optical cable to transport information to the main control centre and then to the cloud. This methodology can take care of the insecure connection between devices and the cloud, a significant security hurdle. However, this only partly tackles the security issue. 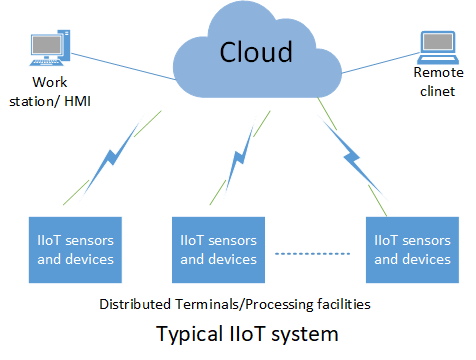 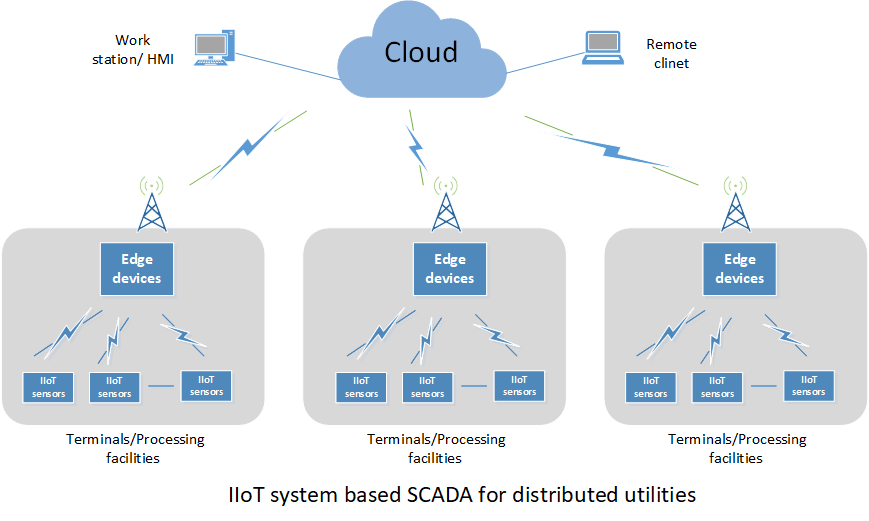 No single system can provide total protection. The Anti-virus software cannot reliably stop malware attacks. The security updates are created only after loopholes are known and cannot stop any new threats. The use of an intrusion detection system can detect attacks but cannot prevent them reliably as there may be a delay between detection and actions taken for prevention. Securing the system requires multiprong strategies. 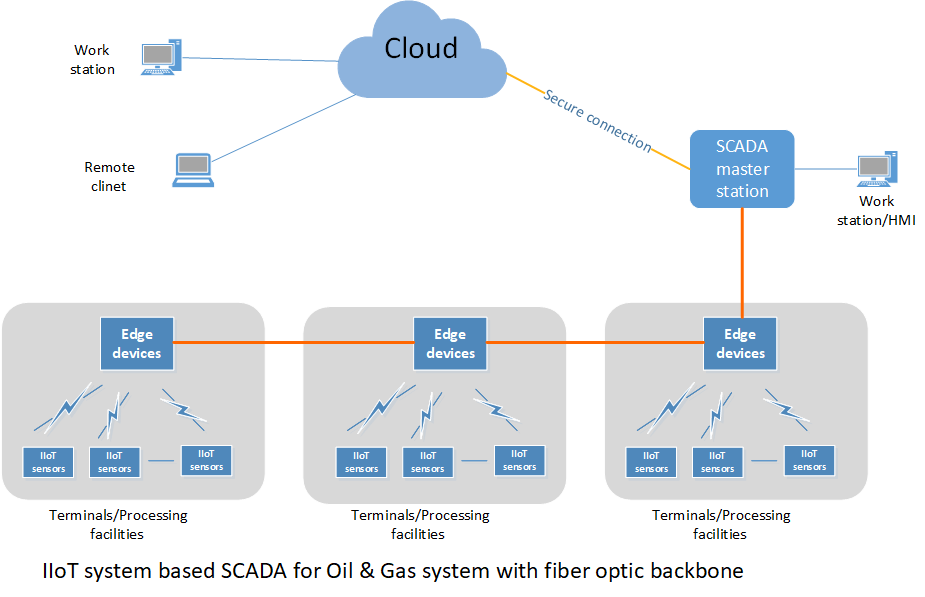 For a typical oil and gas network or power grid network that uses fibre optic cable as a backbone, the system can be made secure and reduce the risk considerably using the following guidelines over and above the use of traditional security tools such as antivirus, firewalls, and IDS system:

Due to their use in the critical system, any breach in the security of the SCADA system can be devastating and can lead to grave consequences. The use of IIoT devices for SCADA can improve reliability, safety, and energy efficiency. Despite security concerns, the IIoT has not been ignored by the industry due to the immense benefits it can provide. Using IoT with many devices connected using an open network provides new attack surfaces to attackers and makes them vulnerable to cyber threats. However, fibre optic cable laid along with the pipeline or power lines can significantly reduce this risk for oil and gas systems. The various challenges exclusive to IIoT based SCADA system has been briefly discussed and guidelines to make the system secure and risk-averse.

The security of the industrial system using IIoT must be taken into consideration at the design stage itself. A defence-in-depth strategy needs to be adopted with authentication for all users, devices, applications, using encryption for data storage and transport.  Implementation of network segmentation, endpoint security methodology for all devices is essential, along with adequately securing the cloud environment for this type of project. The system should be designed for end-to-end security to make the system secure.

Anti-Surge Compressor system: A must needed safety precaution in Oil &...