Water is a valuable commodity, and its scarcity is becoming an ever-increasing problem worldwide. In North African countries, water supply is limited, the quality is deteriorating, and there is an ever-widening gap between availability and increasing demands. All these factors make it imperative that action is taken to avoid an impending shortage and avoid disputes and international conflicts over transboundary water resources.

From a very early stage, the Libyan authorities were aware of the imminent water crisis in Libya and the North African region generally. They decided to implement their own national solution [1]. The Great Man-made River scheme—the first two phases completed in 1991 and 1996—involves conveying high-quality water from groundwater in the southern basins to coastal regions where the country’s leading domestic, agricultural and industrial demands need to be met.

The Great Man-Made River (GMMR) consists of a vast network of underground pipelines and aqueducts bringing high-quality freshwater from ancient aquifers deep down the Sahara to the Libyan coast for agriculture, domestic use, and industry. The GMR has been defined as the largest irrigation project globally — indeed, the Libyan government proudly proclaimed it “the Eighth Wonder of the World.” Since 1991, the project has supplied the much-needed water resources to populous cities and farming areas in Libya’s north, which previously depended on desalination plants and declining rain-fed aquifers near the coast.

As a result, Libya is now a world leader in water engineering, and it wants to find a market for its expertise in other African and Middle-Eastern countries facing similar problems with their hydrological systems.

1.2 History of a development

In the XX century, Libya’s population growth and severe drought circumstances had put a heavy strain on its water supply, especially since the country does not enjoy a renewable water source, relying mainly on groundwater to satisfy its historical water demand. In the 50s and 60s, enormous quantities of fresh groundwater were discovered in aquifers in the deserts of the south during oil explorations.

To reconcile the gap in its traditional supplies, the national government, headed by Muammar Gaddafi, undertook one of the most significant civil engineering projects in the world to green the northern shore. [2]. The project aimed to supply H2O for agriculture as well as for municipal and industrial uses from “fossil” water collected more than 35,000 years ago in the Nubian Sandstone Aquifer. This was accomplished by constructing an underground network of pipelines to transfer water from Libya’s southern deserts to its northern towns.

The earliest feasibility studies were carried out in 1974, and construction began in 1984. Evaluation and tenders for the detailed design were concluded in 2005. The project’s water was intended to be utilised for agricultural uses to the tune of 80%. For example, the town of Abu Shieba in the west had 700 hectares of irrigated land before the project. After output from the project reached the place, agricultural lands increased to 1600 hectares, and the number of farmers more than doubled from 117 to 305. Following the experiment, water-intensive crops such as maise, peanuts, and vegetables like cauliflower and cabbage and fruits like oranges and grapes were planted, improving farmer revenue. 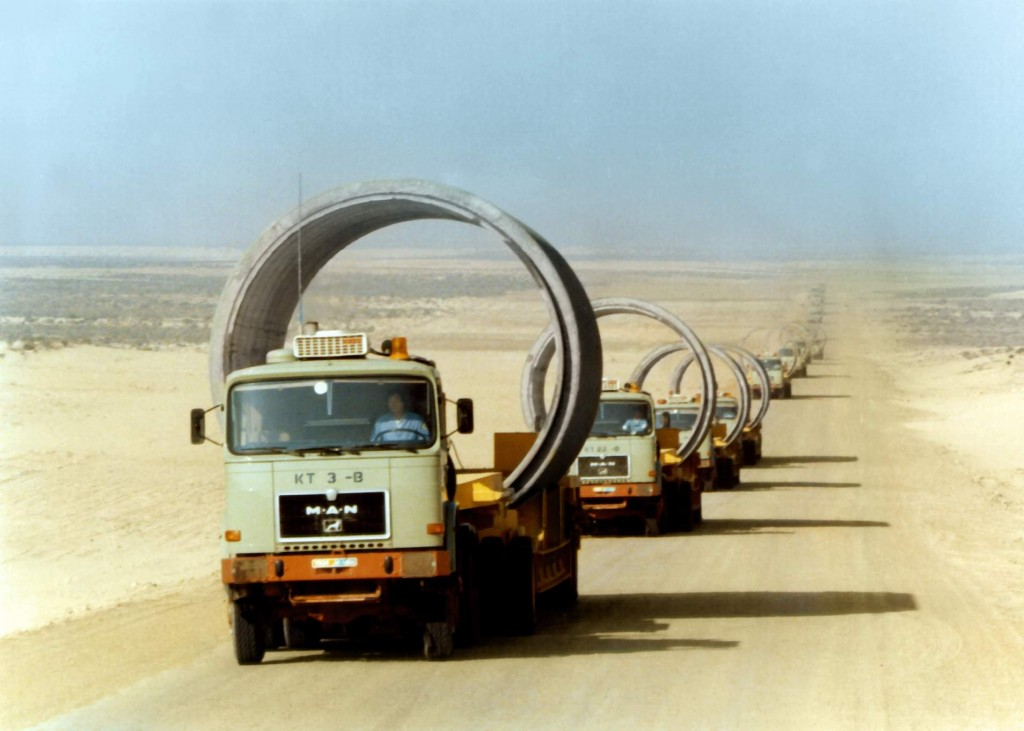 The project’s goal was to make Libya self-sufficient in terms of water imports by generating enough water to meet its municipal, agricultural, and industrial needs. Government officials had planned that Small farmers would be provided land to raise produce for the home market, and large farms would also be built to cultivate Libyan-imported crops. The initiative might also allow Libya to launch an agro-business comparable to California’s San Joaquin, a desert valley that has become one of the world’s top producers thanks to irrigation projects [3].

In 2011, NATO bombed the Great Man-Made River — an attack over essential civilian infrastructure [4]. 70% of Libyans depended on water piped in from the works under attack. Since the water pipe infrastructure is probably the most essential civilian infrastructure in the country, particularly in the time of war (2011-2020), bombing the Brega pipe factory, which enables leaks and breaks in the system to be repaired, was allegedly a war crime. NATO admitted that its jets attacked the pipe factory, claiming in justification that it was used as a military storage facility, and rockets were launched from there.

The GMMR has established important water supply wellfields, including Sarir-Sirt, Tazerbo-Benghazi System (SSBT); Kufra/Tazerbo System; Sirt/Assdada System; Jagboob/Tobruk System; Hasouna-Jeffara System; and Ghadamis/Zwara system. The Tazerbo Wellfield is situated in southeastern Libya. It is located in a flat desert area at the southern limit of the Sarir plain and covers an area of 1000 square kilometres. The Tazerbo Wellfield lies along the south – west north – east alignment of the southern flank of the Hercynian uplifts, which forms the boundary separating the Kufra and Sirt basins. 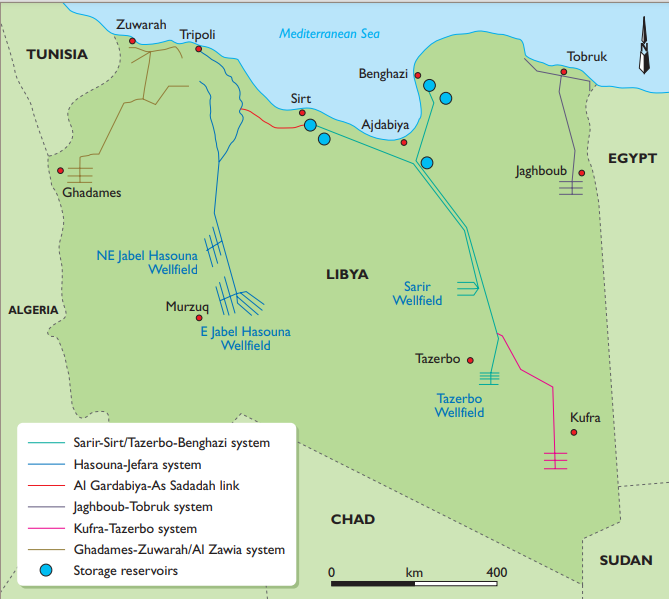 In 2005, the Great Man-Made River Authority awarded one of the most challenging sections of Libya’s mega water transmission scheme: construction of 380 km for water conveyance between Al Khufra and Tazerbo. Free issue post-tensioned concrete pipes, each with a length of 7,5 m, a diameter of 4 m, and a weight of 72 t, were transported and erected in the harsh conditions of the Sahara Desert. The project is part of a multinational scheme monitored and supported by International Fund for Agricultural Development (IFAD), an organisation under United Nations.

So, what are its main highlights?

The wellfield system also comprises more than 98 exploratory and piezometric wells. At present, the well field produces approximately 490,000 m3 /day and is planned to produce 1,000,000 m3 /day in the future. Kufra basin, from which Tazerbo groundwater is extracted, is one of four principal groundwater reserves of good to excellent quality fossil water in the middle and south of the country, as shown in Figure 2. High drawdown has been noticed in the centre of the wellfield due to limited pumpage (Max: 500,000 m3 /day).

The pre-stressed concrete cylinder pipe factory located in the northeastern port of Brega is one of just two such facilities in Libya – the other being at Sarir oil district to the south. This makes it a crucial component of the Great Man-Made River, with two production lines making up to 80 pipes a day.

At first, the plant had to rely on foreign-owned companies to do the work. But now, it is government policy to involve Libyans in the project. Nationals are gaining experience and know-how, and now more than 70% of the manufacturing is done by them. With time, officials hope to decrease the foreign percentage from 30% to 10%.

According to the Great Man-Made River Authority:

The primary operational objective is to ensure that inflows to the system match outflow from the system as closely as possible at all times. Under normal conditions, the inflow to the system will be determined by agreed quotas based on the forecast requirements registered by end-users. The influx from the wellfields into the system can vary based on the number of well pumps brought into operation. Any differences between inflow and outflow will be balanced at the Ajdabiya holding reservoir.

The operating philosophy of the Sarir–Sirt/ Tazerbo–Benghazi system provides for overall operational control to be exercised from the main control centre, located initially at Ajdabiya and ultimately at the Benghazi headquarters. Area operations centres located in the operation, support and maintenance facilities at Ajdabiya, Tazerbo, Sarir and end reservoirs will operate as instructed by the main control centre or following defined procedures in the event of a communications failure. A maintenance strategy addresses all aspects of maintenance management, which is organised and carried out to a predetermined plan with support from relevant information systems.

The quality of the water produced in phase one generally conforms with World Health Organisation standards. However, water produced from the Tazerbo wellfield requires treatment. Dissolved carbon dioxide, iron and manganese are removed by aeration at the wellhead sites. At two agricultural projects in the Sarir region, fields have been cultivated using sprinkler systems since 1970. No adverse soil conditions have been encountered, and no significant water quality changes with time have been recorded.

As expected, water losses along the conveyance lines are insignificant, but substantial evaporation losses have been experienced from three balancing reservoirs—estimated to be about 3 million m3 annually. An evaporation retardant or floating solar panels could save about 35% of this. However, additional water losses through the municipal distribution networks may exceed 20%. The latter losses can be substantially reduced by early notification of leaks and rehabilitation of the distribution systems. 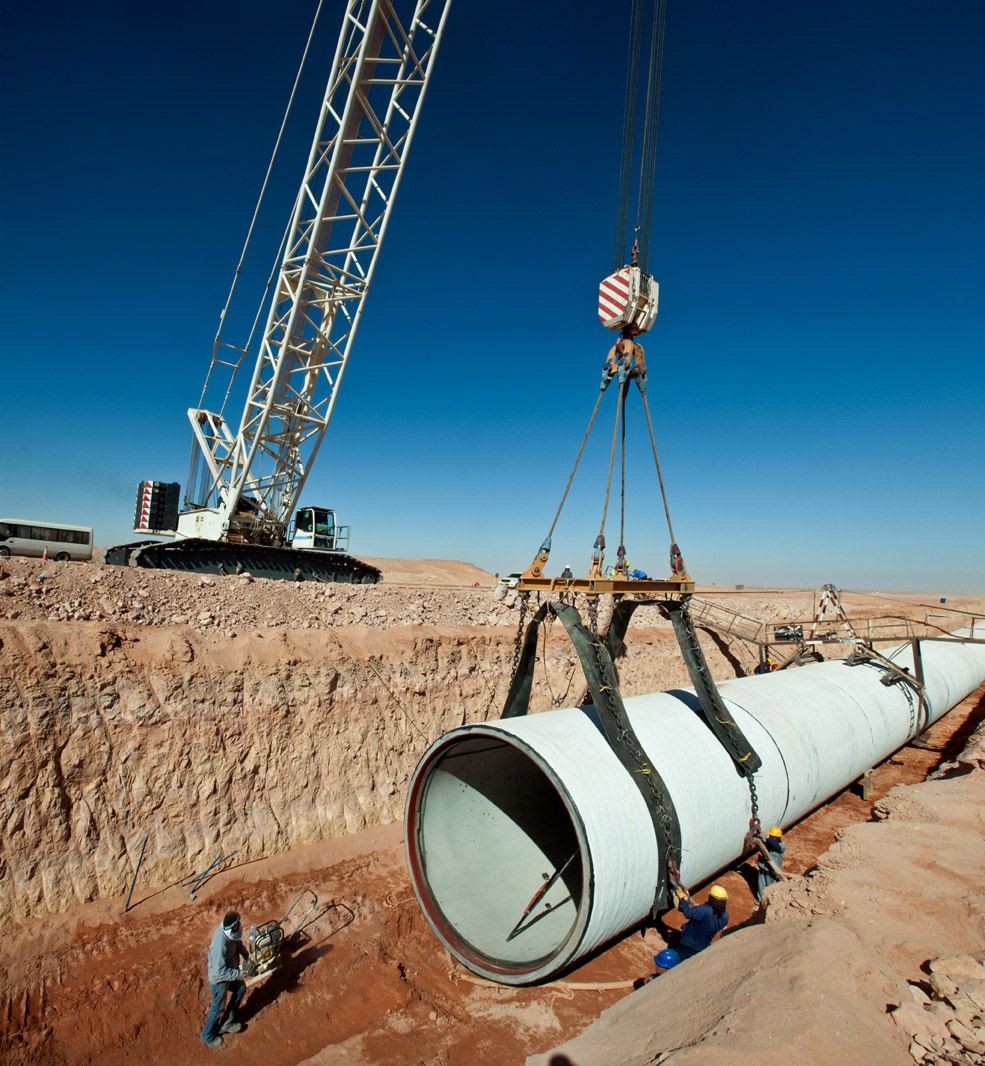 Pipe failures and rehabilitation is also critical project component. The phase one system consists of 60% ‘white’ (uncoated) pipes and the remainder ‘black’ (coated with coal tar epoxy). The latter is used in areas initially deemed as corrosive.

Pipes have failed from time to time in the Sarir–Sirt line and the Tazerbo–Benghazi line. Investigations determined that the failures were caused by chloride-induced corrosion of the pre-stressing wires. An extensive survey was then carried out, initially using traditional techniques such as tapping, close-interval potential surveys and potential mapping. Later, electromagnetic inspection and acoustic monitoring techniques were applied. The extent of the problem was then assessed, and it was found that only some of the uncoated pipes were affected.

The next challenge was to rehabilitate the pipelines without interrupting flows. Since phase one has two parallel lines, it was possible to keep the system in operation by diverting the incoming flow of the line being repaired into the adjacent line, in some instances via cross-connections.

A crash programme was implemented to repair only the most severely distressed pipes on the Sarir–Sirt line. This was then recommissioned, following which there was a full-scale rehabilitation of the parallel Tazerbo–Benghazi line. Some pipes that exhibited a lesser degree of stress but could not be replaced at the time on the Sarir–Sirt line are currently being monitored using the acoustic technique. Owing to the bursts of uncoated pipes of phase one, only coated tubes were used on phase two and will be used in future phases.

3 TROUBLE AHEAD THE GMMR

The Great Man-Made River is a remarkable feat of engineering, but the entire system could collapse if the mayhem in Libya continues. By the time the rebellion against Gaddafi started in early 2011, more than 70 per cent of the work on the GMMR was completed [6]. Still, with the chaos resulting from the subsequent civil war, the project and its web of infrastructure are under serious strain, threatening water supplies to a majority of Libya’s 6.8 million people.

Chronic power shortages in most areas of the country are dangerously impeding the operation of water-pumping stations and wells. The many causes of the current deplorable state of the Libyan electricity sector are relatively well known. They are listed below, in no order, as factors to consider in the design, financing and implementation of the turnaround programme. Many of the causes are interconnected and overlap.

Meanwhile, power blackouts imply people in Libya’s two main urban centres – Tripoli and Benghazi – have to go without water for up to six hours a day, sometimes longer. Farming regions and other parts of the country dependent on the GMMR are similarly affected.

There are deeper concerns about the long-term fate of the GMMR. Though there is a vast amount of water under the desert, it is not being sufficiently replenished. Local officials once said there was enough water to last for several centuries; others warn it could be exhausted within 80 years. The massive aquifer system in southern Libya crosses into the territory of Egypt, Sudan, and Chad.

The claim of “the eighth wonder of the world” could collapse if social pressure, underinvestment and overexploitation of Libyan water resources continue – resulting in a chronic crisis affecting millions of people.