LPG has had a dramatic impact in our world since its discovery in 1910 by Dr. Walter O. Snelling. It changed and bettered the way we cook, heat our homes, drive our cars and keep our food stored in a cool environment. However, LPG has potential to cause destruction if not properly handled, stored and managed. To enable us to do all of this in a safe manner, international and local codes and standards have been developed to provide legislation and guidance to designers, distributors, operators, etc. This article looks at comparing the site layout guidelines for bulk LPG storage between the NFPA (National Fire Protection Association) 58 and SANS (South African National Standards) 10087 3 codes and standards. This article’s intent is only to indicate major differences, when designing a system. Reference should be made to the original codes and standards. Specific project requirements were not included in this discussion.

1 NFPA and SANS standards in relation to LPG

NFPA (National Fire Protection Association) is a global non-profit organisation and has developed codes and standards for the usage and adoption by governments and many institutions around the world. Many of these codes and standards are also used by the South African government as part SANS suite of standards, that is enforced to be used as a minimum requirement on South African installations. NFPA 58 is developed as an industry benchmark for safe bulk LPG storage, handling, transportation and use. NFPA 58 mitigates risks and ensures safe installation to prevent failures, leaks and tampering that could lead to fires and explosions.

The South African set of codes and standards for a LPG installation are based on various British standards, NFPA publications and international best practices.

SANS 10087 are divided in to several different parts. Part 3 covers the bulk storage of LPG and will be compared with the NFPA 58 standard in relation with plants layout requirements.

When planning the layout of a bulk LPG storage facility or a single tank, the SANS 10087 part 3 and NFPA 58 standards can be used as a guideline for the correct manner in which to execute the design planning and layout of the facility.

The location of the bulk storage containers is a major component that will guide the overall layout of the facility, as well as the safe maximum storage volumes that fits on the plot area in terms of the standards. In this section the placement of storage containers will be discussed. The layout constraints will prescribe the maximum container size and therefore maximum quantity of LPG storage allowed on the site, subjected to environmental impact and major hazardous installation constraints. Only the placement of the container is discussed below with other constraints outside of the scope of this article 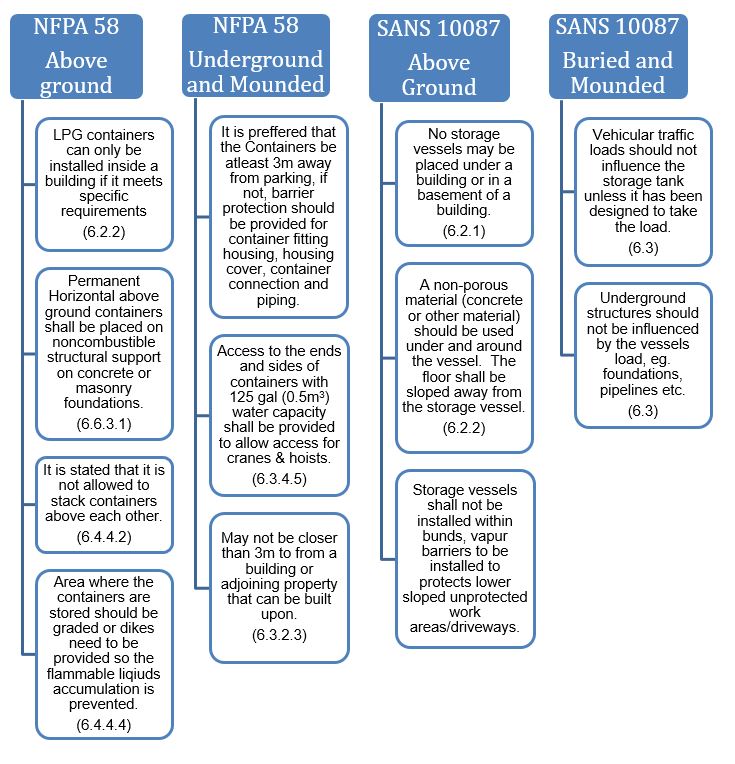 Figure 1: Comparison between NFPA58 and SANS 10087-3 for storage container locations.

The comparison was summarised in order to explain the differences between the codes. The code references in the brackets refer to NFPA 58 2014 Edition and SANS 10087-3 2008 (Edition 4).

In terms of bunded areas around the above ground storage containers, upon first glance a conflict in recommendations is perceived. When studying this, both codes recommend protecting adjacent areas from accumulation of heavier-than-air explosive gasses and directing gases away from unprotected areas by using slopes or vapour barriers/dykes.

It is recommended to consider both codes to ensure that you comply according to safety regulations.

Spacing of storage containers is important for the safety of the container next to it and general facility safety. The following section will deal with the different types of LPG storage methods and which codes and standards are applied to each situation.

When considering aboveground/mounded tanks both codes give similar distances to property boundaries (between 3m-15m) depending on the container size. 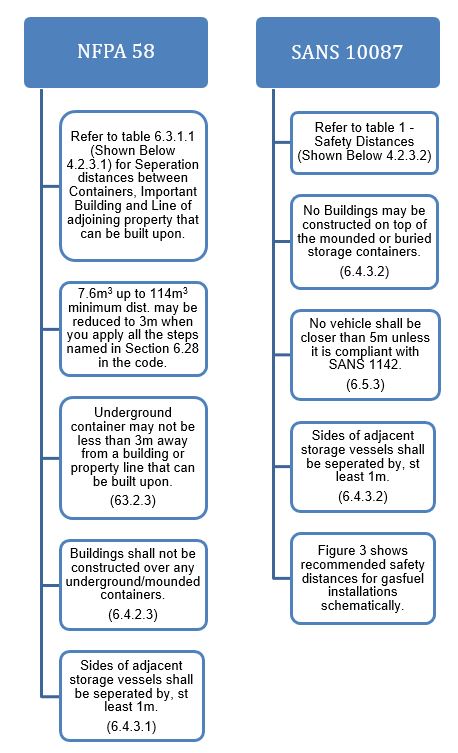 As per the previous comparison in Figure 1, the safety distance comparison above also indicates similar requirements and it is recommended to follow both code recommendations for good engineering practice. 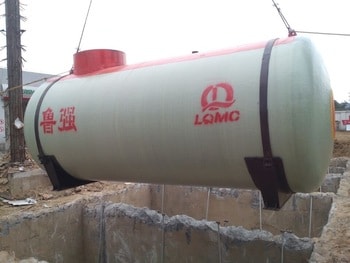 Figure 3: Example of a buried (underground) tank – as shown, the tank has a concrete barrier around it and should have proper ventilation and liquid gas collection, like at the bottom, in accordance with the standards and codes to remove any LPG spillage (for the prevention of fluid accumulation and volatile environment creation). 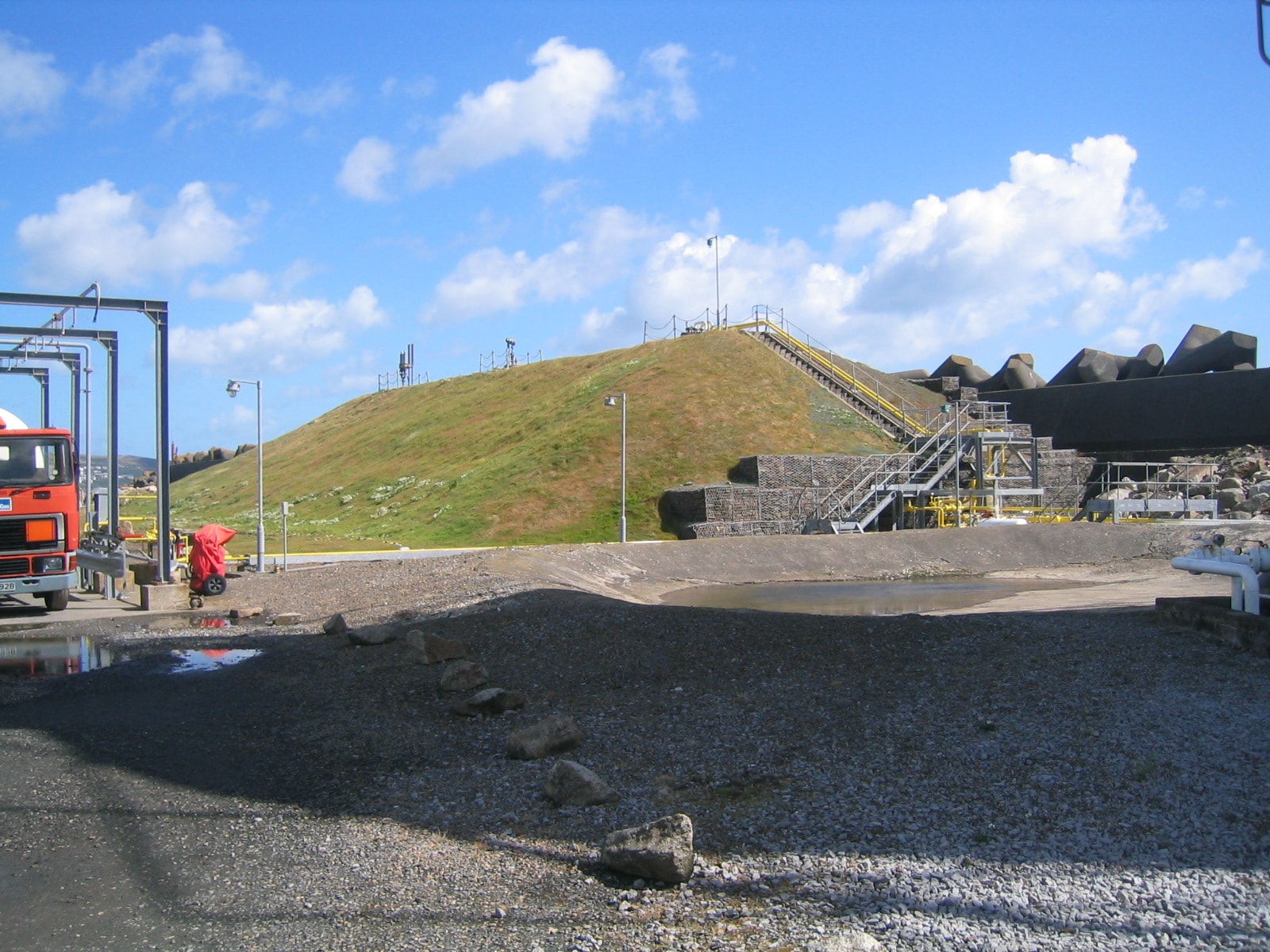 Figure 4: Example of mounded storage tanks – in comparison with above ground installation, the safety distances are minimized. This method consists of semi-burying tanks so that a distance from the centre of the tank to a a length above the tank is covered with either soil or concrete. Figure 5: Comparison between safety distances specified by NFPA58 and SANS 10087-3 for above ground LPG containers.

Figure 6: depiction of an above ground LPG storage container installation. In this case the installation was an appropriate distance away from buildings, loading bay etc. hence why there are no bunds, dykes etc. installed.

2.2.3 Rules Pertaining to Groups of Containers and other Requirements

The following section deals with LPG bulk storage grouping. Both NFPA 58 and SANS 10087 deals with safety separation distances and surrounding structures as dikes and curbs which collect flammable liquids which have a flash point below 200 °F (93.4°C). The code also limits the number of containers in a group as depicted in table 6.4.1.2. SANS 10087 has similar requirement but includes a firewall if more than 6 vessels are used in the group. 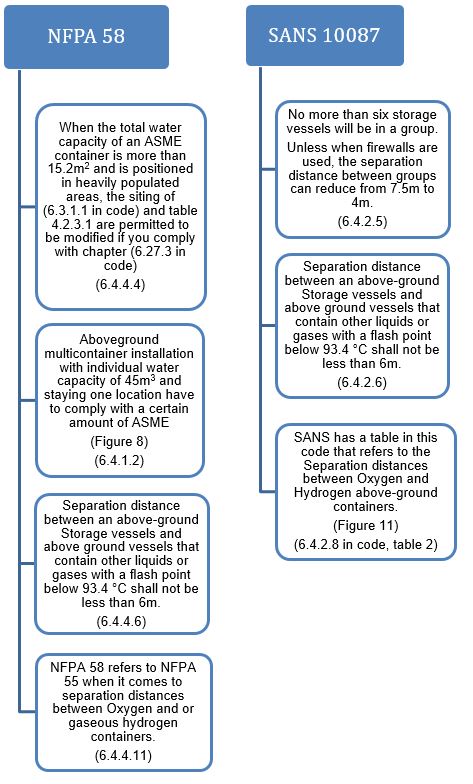 Figure 7: Comparison between safety distances specified by NFPA58 and SANS 10087-3 for Groups of LPG containers.

In this comparison there are once again some common rules to apply with, but one standout is that SANS shows more detail on separation distances when you look at other fuels (Oxygen in particular). This eases the process up by not jumping to different codes.

2.2.4 Maximum Number of Containers in a Group and their Separation Distances – NFPA 58 (From Code)

The table below was taken from page 33 of the NFPA 58 standards. Showing the maximum number of above-ground containers in a group which is limited by the type of fire protection provided. Each container has a size of 12,000 galloons (45m3 ) or more: 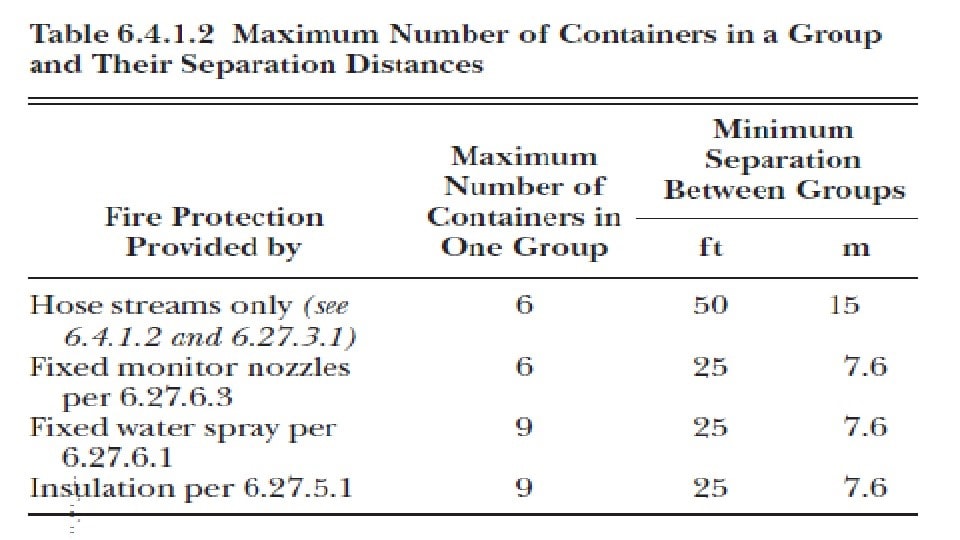 Figure 8: Table showing the maximum number of containers in a group and their separation distances. 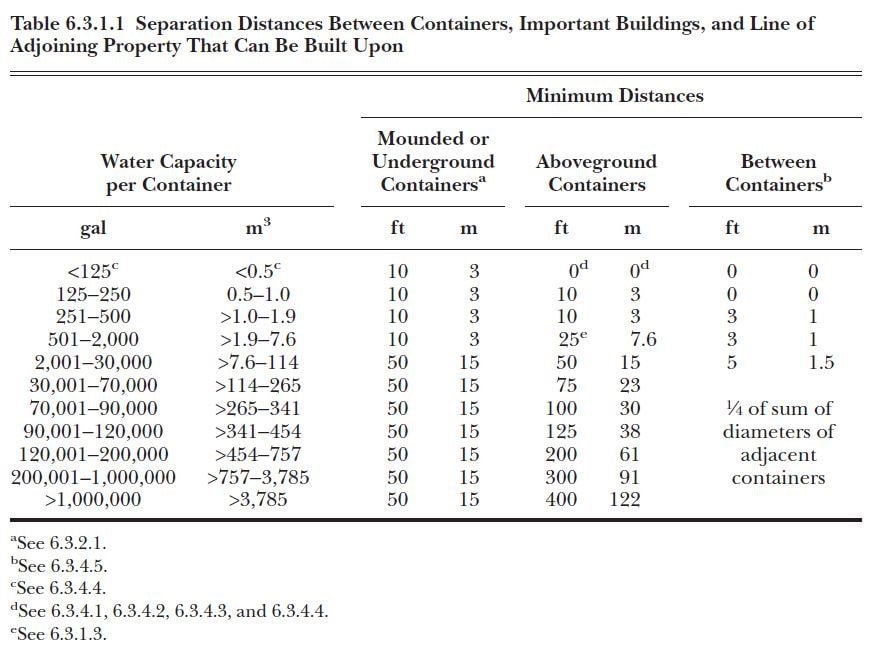 NFPA 58 does not contain any visual layouts, but the tables are easy to read.

In the following section you will find most of SANS separation distance layouts and tables. In this case it is much easier to find the information needed to ensure the correct standards are followed with your new plant layout. Figure 10: Table showing the separation distances for: “adjacent containers, important buildings, groups of buildings or adjoining property that can be built upon.”

Figure 11: Depiction of the minimum separation distances of LPG vessels below 200 tonnes. A firewall with a resistance rating of at least 2 hours interrupts the line of sight between the unprotected (uninsulated) section of the containers. Sources include: Liquefied flammable gases, flammable liquids and oxygen storage. (Page 17, SANS 10087-3). Figure 12: Depiction of a section of a storage facility plant layout, with recommended safety distances for above ground combined fuel/gas facilities. (Page 36, SANS 10087-3). Figure 12.1: The Figure shows the recommended safety distances for gas ONLY fuel installations.

In figures 10 through 12, it is noticeable that using SANS 10087-3 is more user-friendly. Whether you are designing a plant layout that will consist of white products and LPG or only a LPG site, there are enough safety distances to do so.

Please remember to refer the latest versions of the codes to ensure you comply with the rules and regulations. Although much does not change from version to version, it will still be an advantage to apply good engineering practice to any design.

To ensure safety of personal and assets on site, careful planning should be taken into account when designing and installing piping in the correct manner, using the recommended type of material in accordance with the standards and codes. This will reduce failure of the piping during its life span/facility. NFPA 58 states that certain piping either indoors or outdoors has certain pressure requirements. SANS 10087 has a similar requirement but has a in-depth scope of the material which can be used compared to that of NFPA 58. 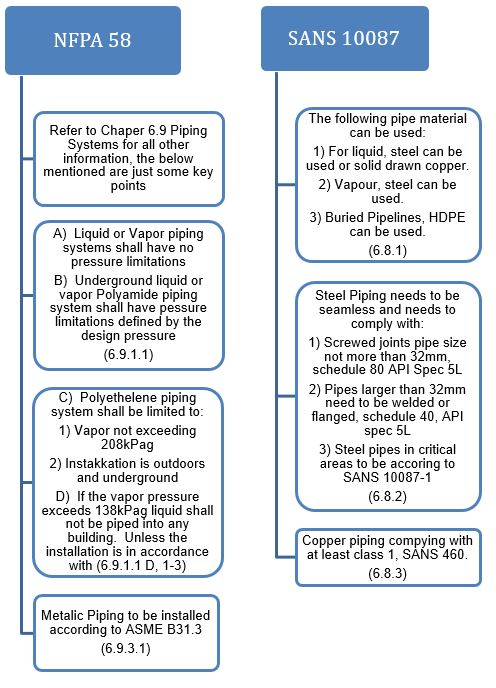 Figure 13: Comparison between NFPA58 and SANS 10087-3 in terms of piping installation requirements.

The figure below is a continuation… 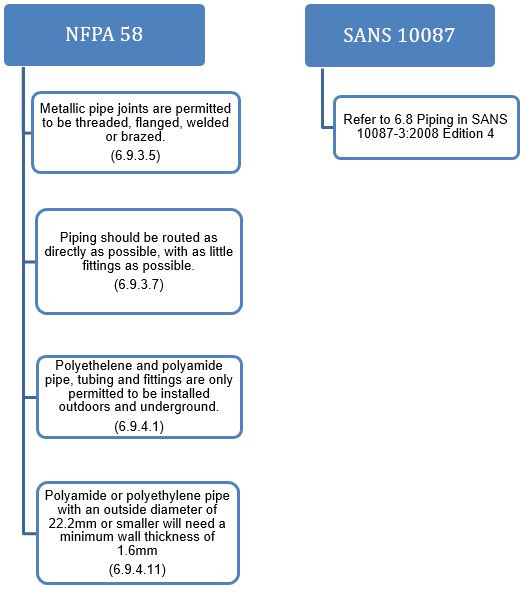 Figure 14: Continuation of Figure 13 which compares NFPA58 with SANS 10087-3 in terms of piping installation requirements.

NFPA 58 standards and codes state cargo tanker transporting flammable liquids must comply with federal DOT carrier safety regulations, which includes the piping and fitments on the road tanker. The standards and codes also have certain safety measures to ensure that LPG is transported between the tanker and the container in a safe manner. SANS 10087 standards and codes only states that the risk which the tanker presents to the bulk storage facility must be addressed and that all truck tanker must carry powder fire extinguishers.

Figure 15: The Figure refers to the general design of a LPG transport tanker. 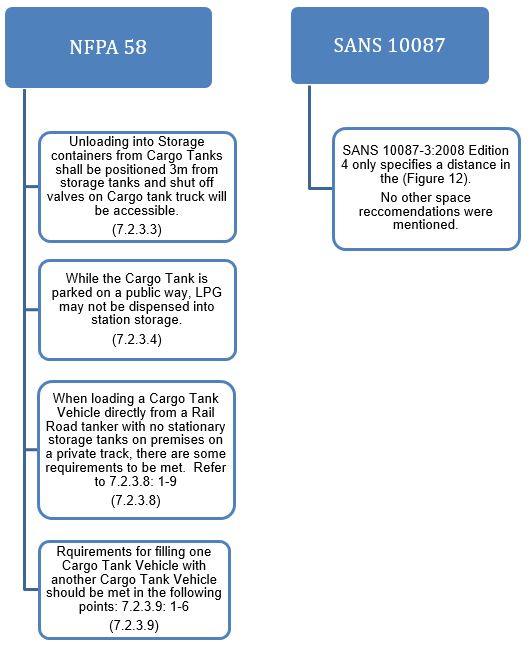 It is clear that NFPA 58 in this instance has a more elaborate recommendation layout to follow compared to SANS 10087-3. SANS 10087-3 only refers to fire protection protocols, by indicating the hose reel etc. you will need to ensure safety (Figure 17). Figure 17: SANS 10087-3 Fire protection details. In the last row, only firefighting recommendations are listed and no mention is made to safety distances.

Each code states the following about rail tanker loading (transfer between containers). Both SANS 10087 and NFPA 58 codes state that a qualified person must be present at all times during connection, filling and disconnect from the rail tankers to the store facilities. 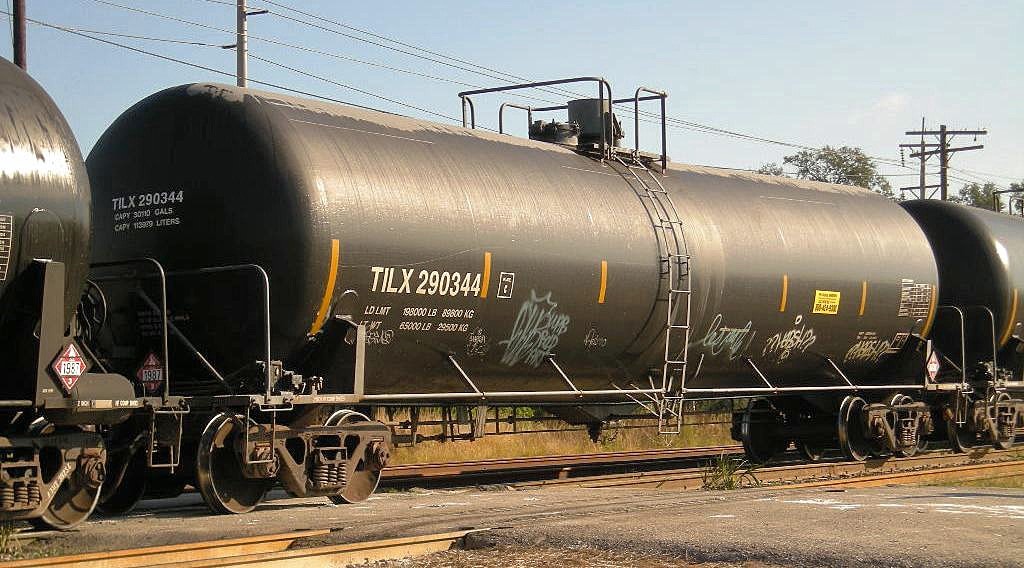 5.1 NFPA 58 – Distance Between Point of Transfer and Exposures

The table below was taken from page 34 of the NFPA 58 standard. It shows the point of transfer’s horizontal distances between containers and other buildings etc. Figure 20: Indication of the safety distance from the point of transfer and the exposure area.

The original codes should still be read to form your own opinion about correct engineering practice. Working with LPG can be dangerous and to ensure the safety of the personal on site and facility, the SANS and NFPA standards should be followed thoroughly before the bulk storage facility is designed.

The two compared codes and standards discussed in the article are NFPA (National Fire Protection Association) and SANS (South Africa National Standards). Both have similarity regarding safety of the facility, but the separation distances in some departments could cause you to prefer one over the other. Using the codes and standards will not only help construct a safe bulk storage facility, but will also assist with the manner in which the facility is utilized during its life span.

We are writing a book

Learn how our culture and strategies took us from a two-person startup to a thousand+ construction business operating globally in just a few years.

Be notified when we launch

That’s not my name!
Scroll to top

We are writing a book

Learn how our culture and strategies took us from a two-person startup to a thousand+ construction business operating globally in just a few years.